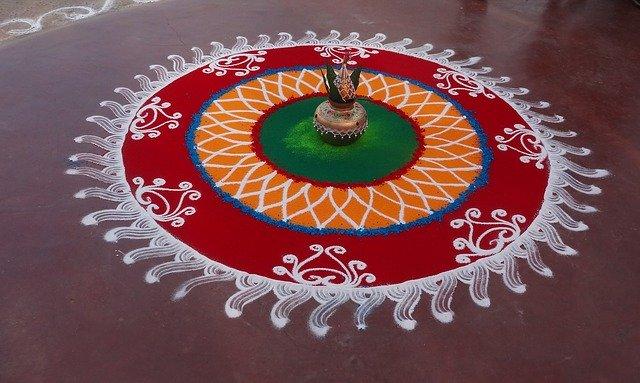 Rangoli by astrologer in india..The art of rangoli has got its momentum from the ancient time in the Hindu mythology. The art of making rangoli has been known to ward off evil spirits from the home or the spiritual place where it needs to be drawn. In one sense, a rangoli is mere dust, subject to the elements and passing time.

In another, it holds within it the timeless act of creation. Rangoli is a traditional art of decorating courtyards and walls of Indian houses, places of worship and sometimes eating places as well.

The rangoli is made with the help of powder made out of white stone,lime,rice flour and other cheap paste to draw the ritual designs. The drawing of rangoli don’t require any formal training.but the art is transferred from one generation to other. The art of rangoli is known with different names in different area in India. Each state of India has its own way of making Rangoli. One characteristic of Rangoli is that it is painted by commoners. People make rangoli not just to beautify their houses on special

occasions like Diwali, Holi but also make it on a daily basis to bedeck their houses. It is believed that Goddess Lakshmi resides in that house where a well made rangoli is made at the doorstep of the house.

Also rangoli is mainly done by the women and girls of the house.The women use their bare fingers or brush to create various designs from sandstone powder.The rangoli also has the essence of use of colour and flowers as in use of petals to decorate the same.The floral designs mostly used create an atmosphere of a well planned divine garden. Rangoli surrounds the sacred spot where pooja(prayer) is performed. It is also drawn where a child is seated for his or her birthday,naming ceremony or thread ceremony or for the purpose of marriage. The art of drawing rangoli is found mainly on the floor near the main doorway to the house.

The art is a mixture of using two different words to make one “rangoli”. The “rang” and “avalli” which means a row of colours. It is considered as the spiritual art. The most expressive form of folk arts are the colourful floor designs, known by different names in various regions, ‘kolam’ in South India,’rangoli’ in Gujarat and Maharashtra, ‘osa’ in Orissa, ‘aripana’ in Bihar, ‘mandana’ in Rajasthan and ‘alpana’ in West Bengal and Assam. They are designed at the doorway to the home by the women folk, both as a means of decoration and as a symbol of good omen. Rice paste, wheat flour, earth and

vegetable dyes are used for the variety of colours and its designs are symbolic with geometric or floral patterns like squares, circles, triangles, lotus, fish, footprints (supposed to be of goddess Lakshmi), leaves, trees, animals, etc. The ‘kolams’ designed during ‘Pongal’ – the harvest festival, are especially delightful to behold.The designs would be simple and geometrical but could invoke symbolic forms. Oil lamps (diyas) would be placed in the rangoli to give it yet another dimension.

Thus, reflecting regional beliefs and aesthetics based on a common spiritual plane the art of floor painting is one which has survived all influences and retained and transmitted the spirit of Indian life. Thus rangoli has been always famous and contains the essence of tradition and spiritual with it.

Why is Astrology Important?